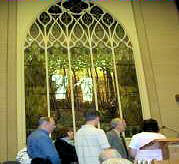 The semi-annual gathering of B’nai Shalom was held Thursday evening, September 29th, 2005 at a ward building in Salt Lake City. It was a memorable evening!

At 7:30 we heard from the invited speaker, Karl-Heinz Schnibbe, a member of the Church and a survivor of Nazi terror during World War II. Following his fascinating and memorable story we returned to the cultural hall to enjoy Middle-Eastern music and feast on the luscious desserts.

Br. Schnibbe is the lone survivor of the Helmuth Hübener Group that comprised three LDS German teens who defied Hitler in 1941. The three teenagers risked their lives in Hitler’s Germany to stand up to the Nazis, who called the boys the "Battalion of the Damned. Karl-Heinz was imprisoned several years in a concentration camp and four more years in a Soviet prison in Siberia. Schnibbe could have been sentenced to death when he stood in front of the Volksgerichtshof, the Nazis' blood tribunal. He endured abhorrent conditions and emerged, in 1949, with his 95 pounds stretched thin across his 6 feet and 2 inches. he was classified as unfit for work and sent back to Germany. His amazing story of endurance and long suffering was inspiring.

Karl-Heinz spoke of the fear, torture and intimidation he and his friends endured, about the bravery of his friend Helmuth, his long time in prison or labor camps, and of his struggle to forgive. "Life was so rough; you had to fight every day just to stay alive," Schnibbe told reporters in 1992, the 50th anniversary of Hübener's execution. At the end when he was free (and very light) after seven years, he cried and cried; those around him wanted to help, but his mother said let it happen. He finally let it all out and felt even lighter; he had forgiven them. To this day he feels nothing but forgiveness.

Br. Schnibbe’s riveting book The Price, no longer in print, can occasionally be found and purchased through internet bookstores. Authors Blair R. Holmes and Alan F. Keele wrote When Truth Was Treason, about Schnibbe’s experiences. Published through the University of Illinois, it is also out of print. However, a BYU video, Truth and Conviction is often shown on BYU-TV, and a full-length movie about the Group’s experiences with the German SS is in production (2005).

At the time of his talk, Karl served as an ordinance worker in the Salt Lake temple.

Helmuth Hubener: In the hours before his death, he wrote three letters to family and friends in Hamburg. Only one letter survives, in the possession of the Sommerfeld family; it includes this text:

"I am very thankful to my Heavenly Father that this agonizing life is coming to an end this evening. I could not stand it any longer anyway! My Father in Heaven knows that I have done nothing wrong. . . . I know that God lives and He will be the proper judge of this matter. Until our happy reunion in that better world I remain your friend and brother in the Gospel. Helmuth."